skip to main | skip to sidebar

Currently my sewing room
is being repainted,
rearranged and redecorated.
This was initiated after (I believe)
my cat, Bobbin jumped on
a 30-year-old bookcase shelf.
I found a shelf of books
on the floor one morning.
It was the final straw.
I was prompted to act.
So I accepted the help of friends,
hired a painter and the project took off.
I will send photos when it is completed.

The downside is that
nearly everything I use to quilt
is covered, packed up
and stored up in various areas.

I really miss my piecing therapy.

Yesterday I pinned a small quilt
on Roscoe (my Gammill Statler Stitcher)
and long armed it.
It is not squared off,
but it won't be until the sewing room is back!
So here is a preview. 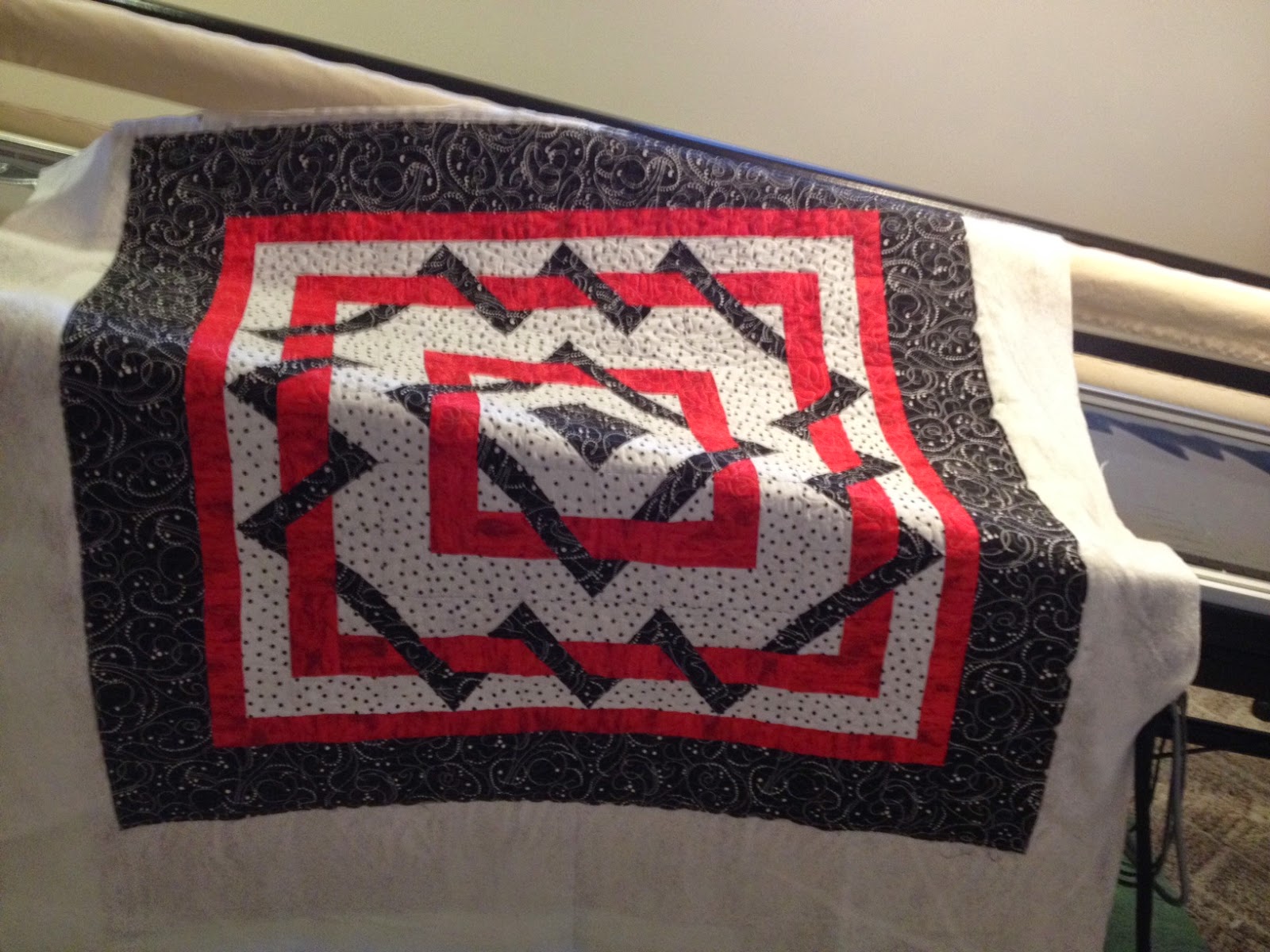 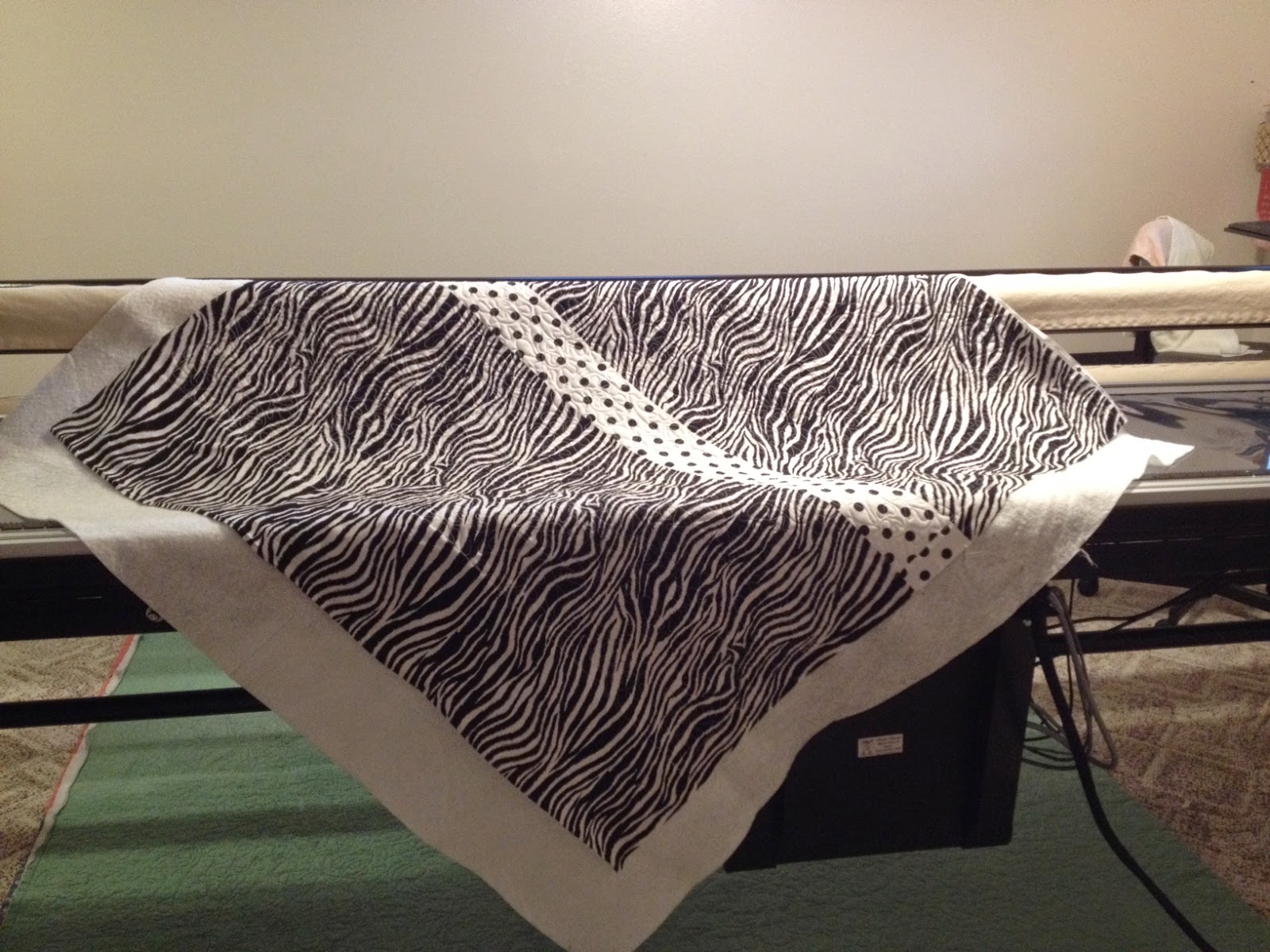 This quilt was a mystery quilt
at Scrap Happy Quilt Guild
around five years ago.
Audria Humphreys and I chose it.
Honestly I don't think
it was very popular with the group,
but we liked it.

Yikes!!!
That reminds me
I have yet to start my 2015 Mystery Quilt.
And the quilt room renovation
will only delay me further.
But to be honest,
I haven't even picked out my fabrics yet.

Hope you are not as far behind as I am.
Carlene

Hot off the Statler Stitcher!

My latest Civil War quilt has just been squared off
and is ready for pink binding. 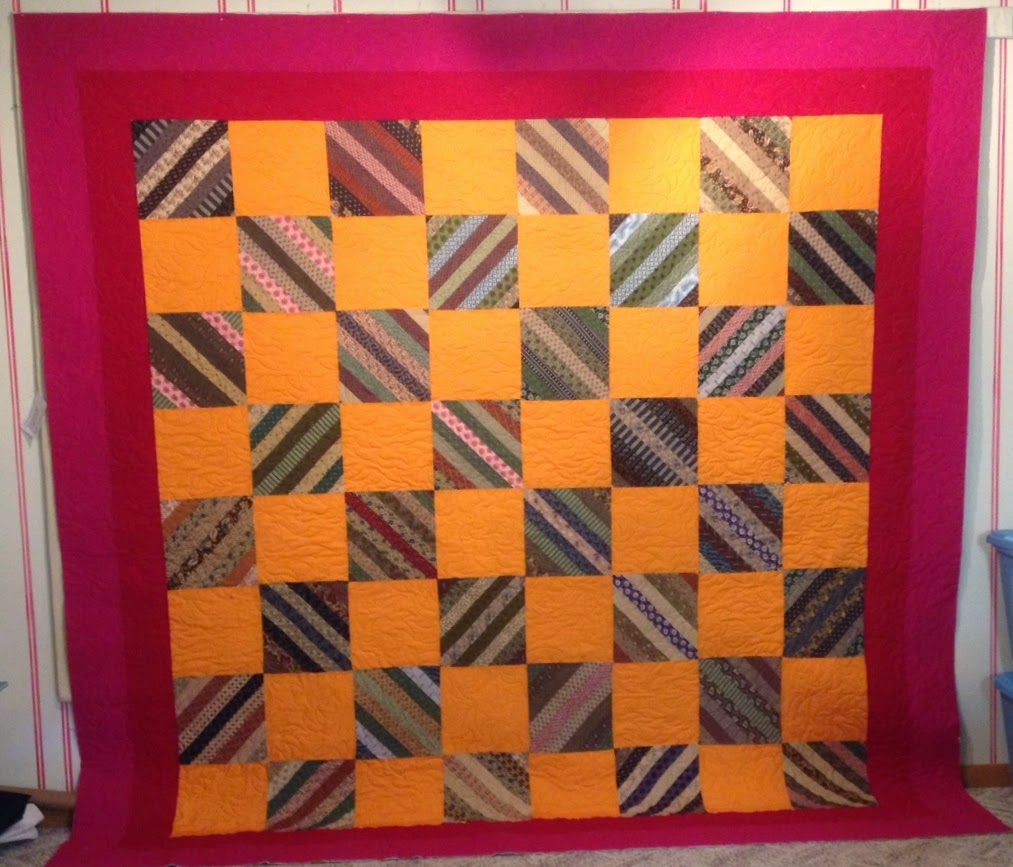 My paternal great-grandfather Jacob Buck
served as a Union infantryman
in the Ohio 29th Volunteers from 1861-1865.
He fought in 19 major battles and never missed a roll call.
Only three soldiers in the entire war had that distinction.
Amazingly he was never wounded and
left the military as full lieutenant colonel.
I learned all this recently
as I was unaware of much history on my father's side.
His parents died when I was a child and he died when I was 7 1/2.
No one was there to pass on the family stories
and I wasn't interested then anyway.

I am making a series of Civil War quilts
and each is being named to commemorate a battle
in which Jacob fought.
This quilt is named Columbia, South Carolina.
Columbia was burned to the ground in December, 1864
by either withdrawing Confederate soldiers,
drunken Union soldiers, or by
out of control fires that spread by the blowing cotton fibers
which were used as fuel.
For these reasons,
I used the machine quilting pattern "Fire" by Cyndi Herrmann. 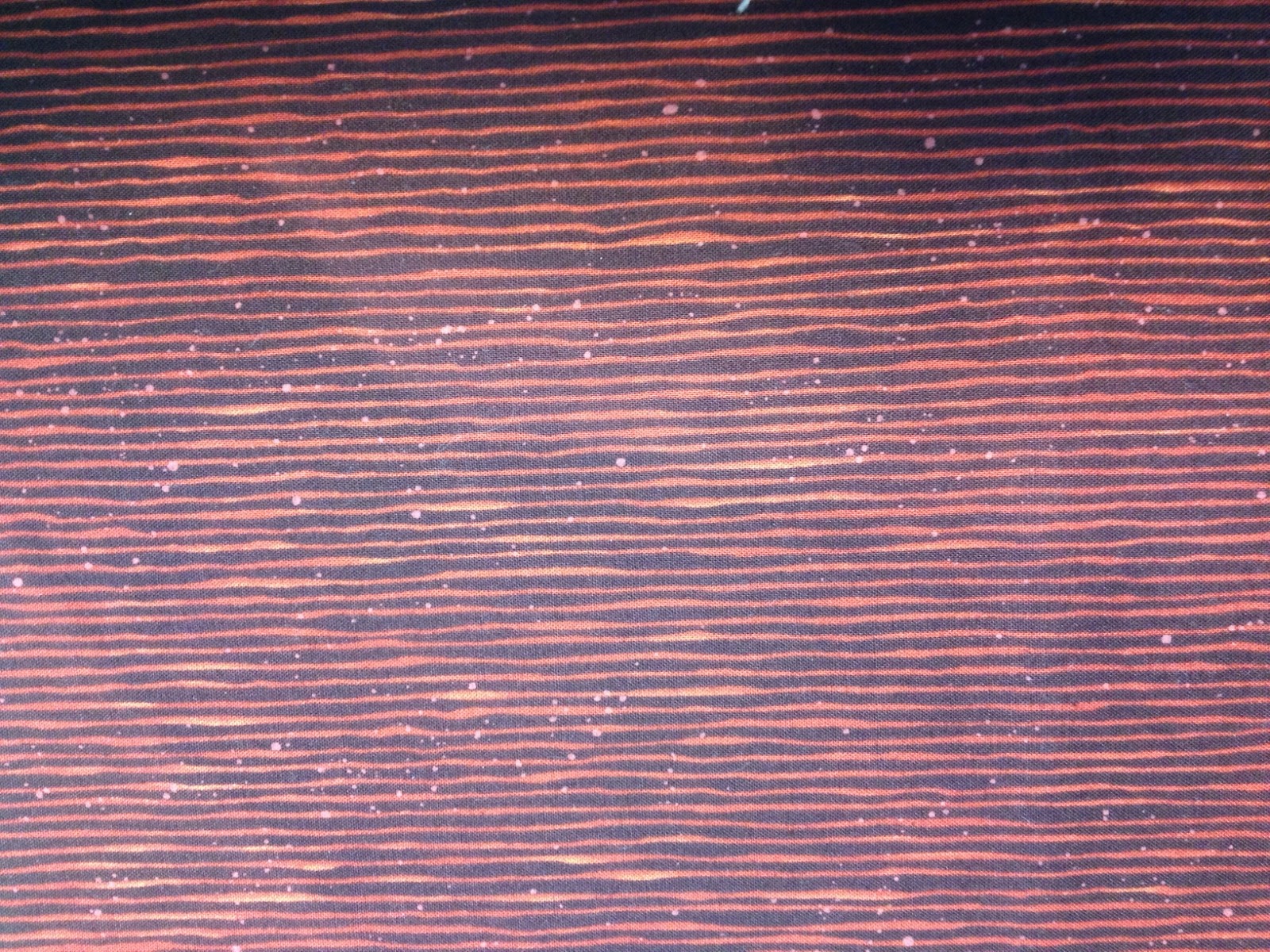 The backing I chose is a red and black streaked fabric
to represent blood and charred wood.

I clipped this photo from a magazine
several years ago
and always knew I would make it. 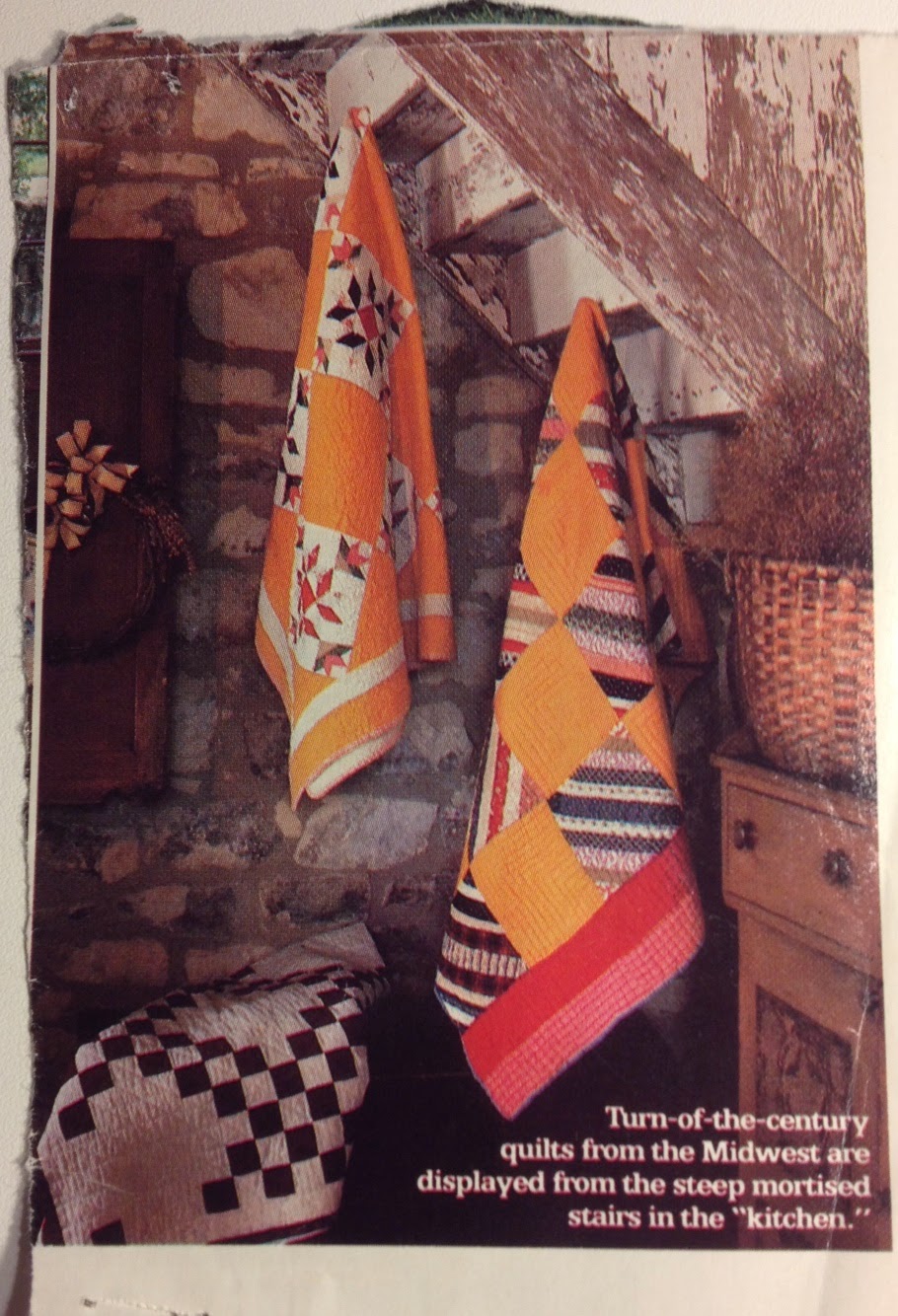 Okay, okay I know it says
"Turn-of-the-century quilts from the Midwest",
but I figured since I was using fabrics from the Civil War era,
it would become a Civil War quilt.
And that's all I'm going to say about that.

Two of my sisters think this latest accomplishment
is a waste of my time and fabric.
(And hope that I soon finish this Civil War phase
and start using some prettier fabrics.)

Each of the Civil War quilts is being made
from the same pool of 1800's style fabric,
but is based on different blocks and
has various settings and different border fabrics.
Some have been inspired strongly by Civil War quilts
in books by Barbara Brachman
and others have come from my collection of quilt ideas.

Since I am a quilt artist, I am creating as I am inspired.
Also they are quite warm, bed-sized
and are most often used when eyes are closed.
So I see it as a win-win and a part of my estate when I die.
Someone will be drawn to it, surely.

Actually when you think of it,
we still are fighting some of the same battles today.
State's rights, civil rights, economic development,
political turmoil, etc.
Humans are so ornery.
They never learn to truly work together,
each giving a little and doing things the best way for the majority.
Most keep their stubborn habits.

Posted by Carlene at 4:22 PM No comments:

Special Trip Around the Midwest completed!

In 2005 I retired and moved
from Buffalo Grove, Illinois to Clarinda, Iowa.
The relocation went well,
but I really missed my church and quilting friends from Illinois.

In 2007
my friends Cindy Kiel, Lenor Davis, Glenda Foley,
Carmen Talbott and Beth Carroll
drove in to Clarinda from their homes in
Illinois, Oklahoma and Kansas to visit me.
We talked and quilted for four days and
all went to the Praise Band service on Sunday at
the Clarinda First United Methodist Church. 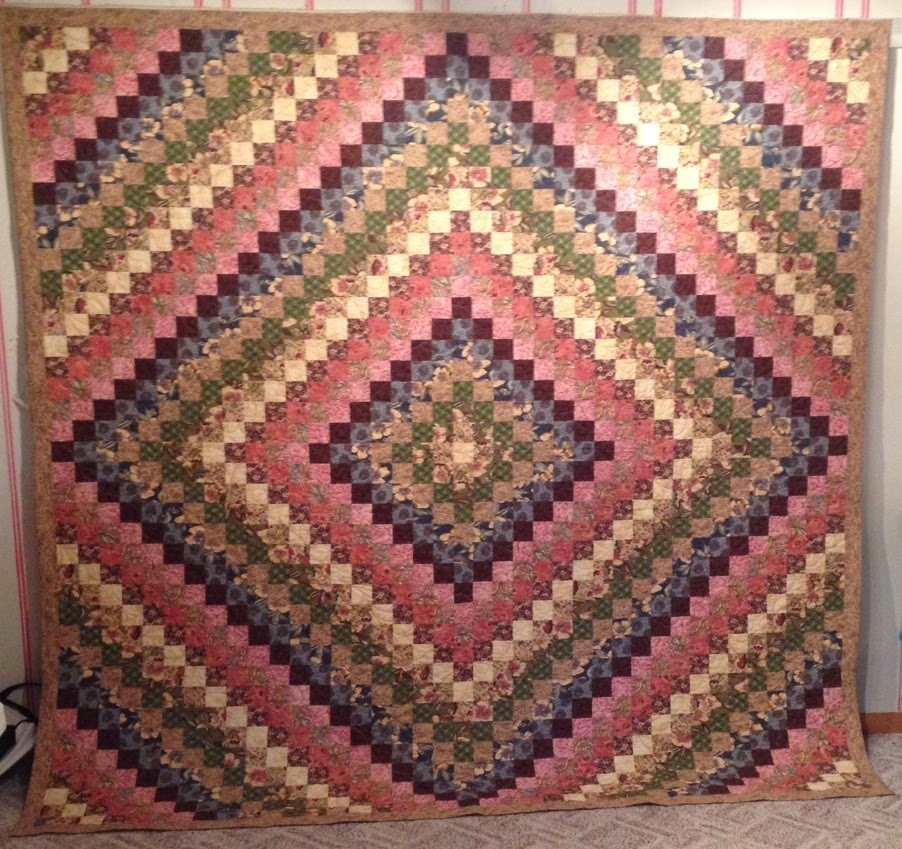 Before they left, they gave me a gift of several fabrics
and I added some of my stash
and made a quilt using the Trip Around the World pattern
to remember their visit.

I machine quilted it and my sister Judy Steeve
just whipped the binding down.
Thank you, Judy!

My sister Deb Corcoran came today
and helped me pin on another Civil War quilt.
Thank you, Deb!
Last night when I was choosing one to quilt,
I found I had two (almost) identical  108" square quilts.
It appears I forgot I already made one
from my "to do" list and remade it.

When they are both done, I'll send pictures.
I can't believe I forgot I made two almost exactly alike.
(I do remember being grumpy
because I was almost out of fabric.)

Hope you don't do that...unless you want to. 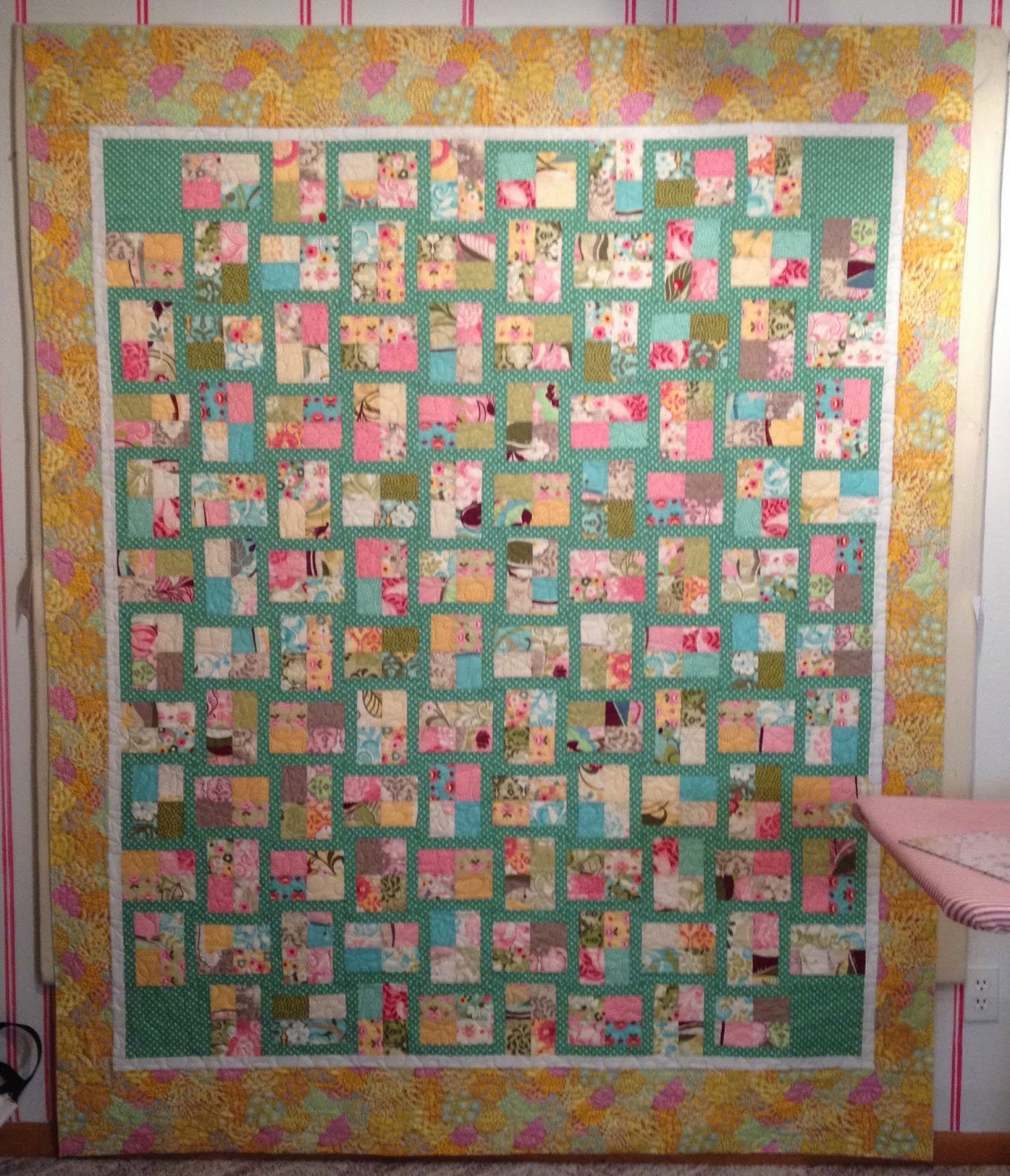 My niece Brittany Loudenback pieced this bright quilt
for her 26-month-old daughter, Ellowyne's big girl bed.
I chose a simple and sweet machine quilting pattern
that features hearts, flowers and circles.
The cotton flannel backing makes it so cuddly. 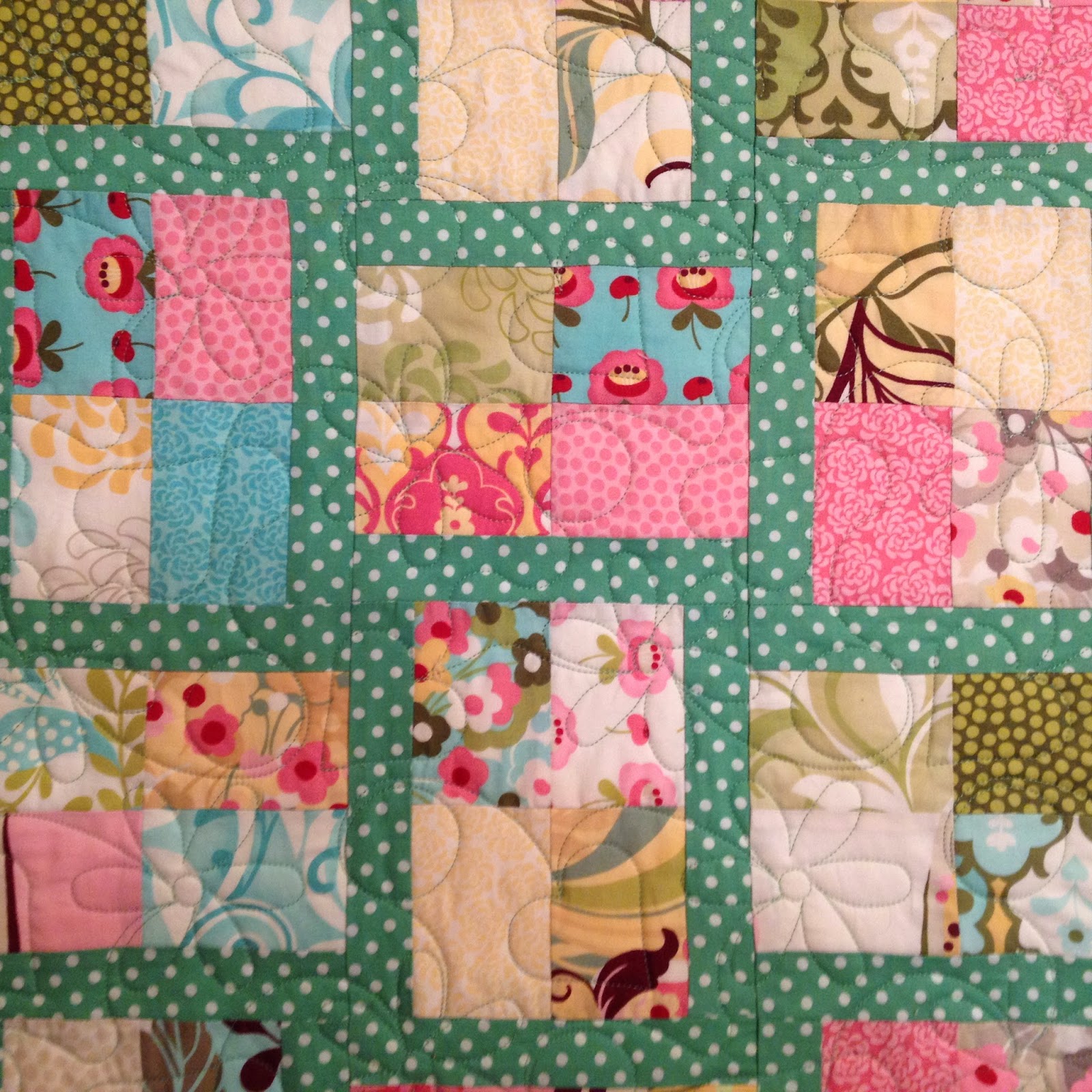 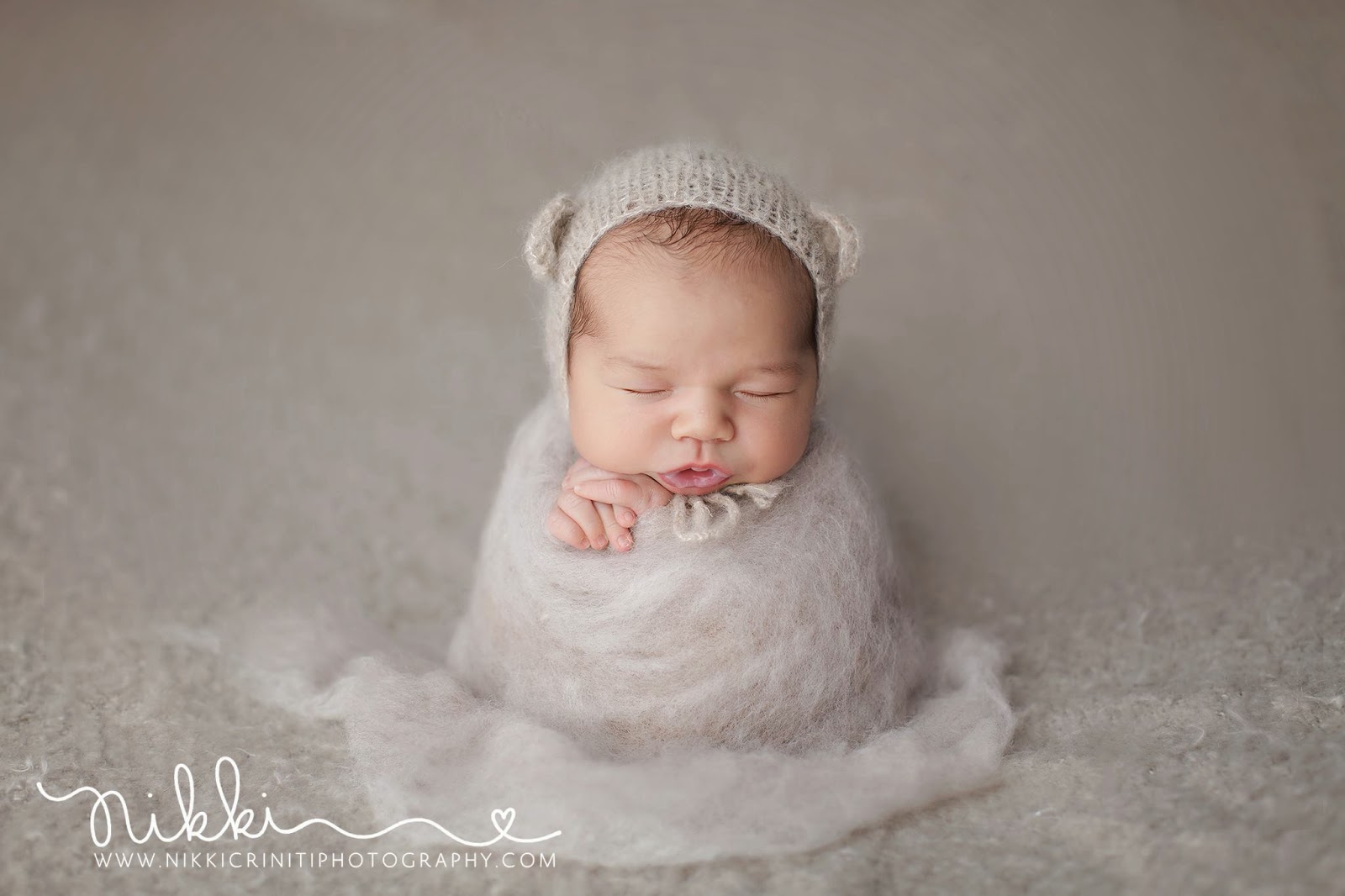 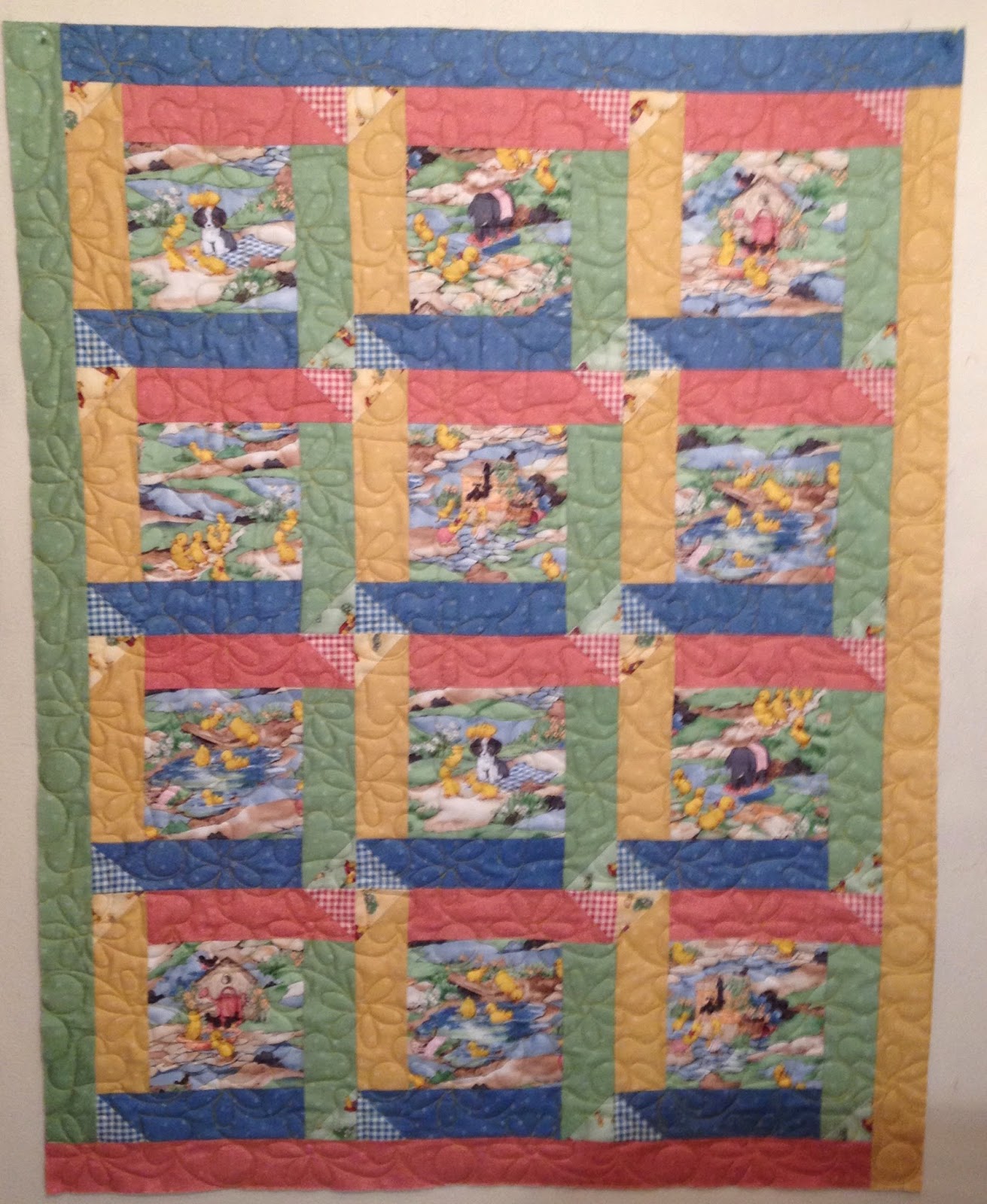 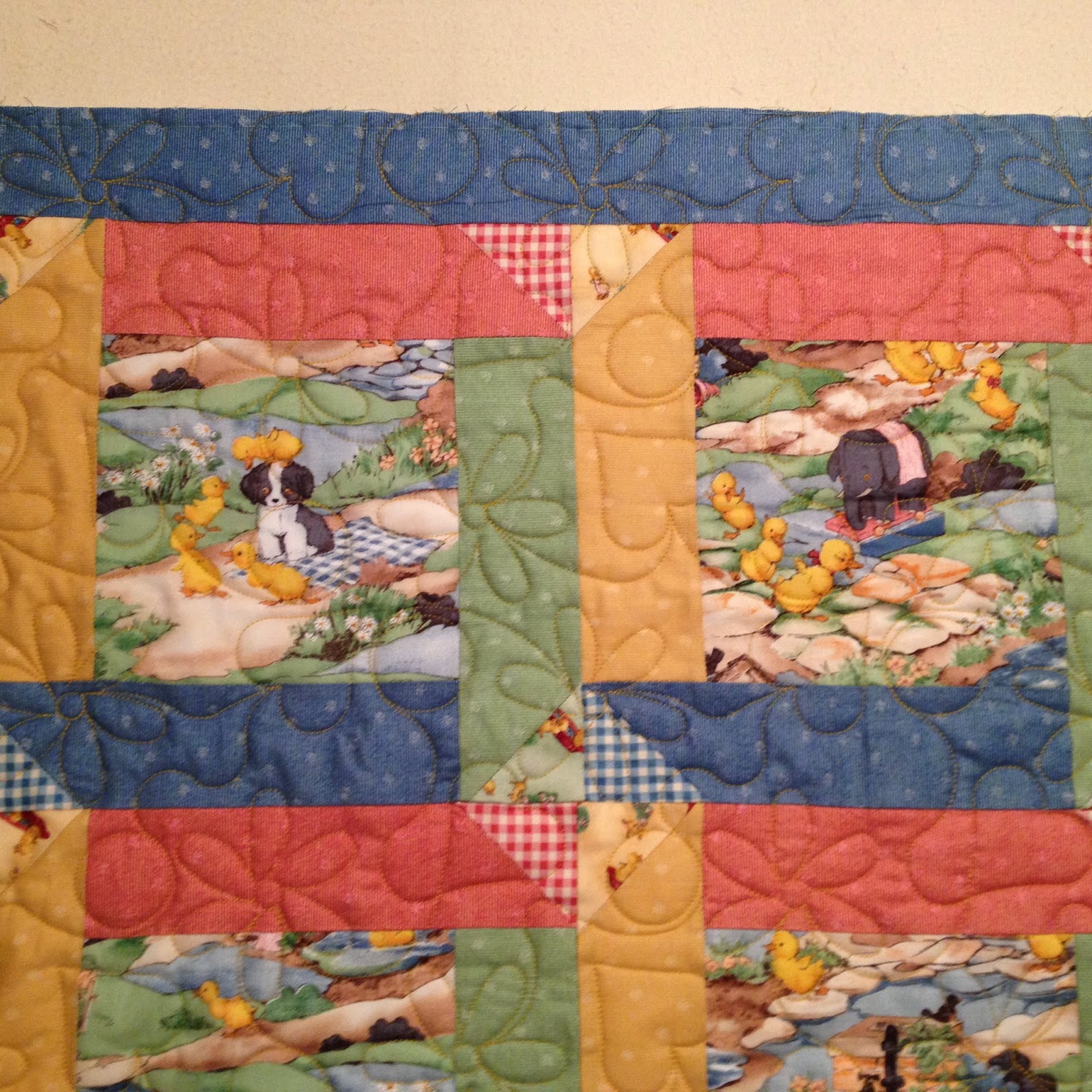 Ellowyne enjoyed making a snowman
during the ongoing snowfalls in Connecticut. 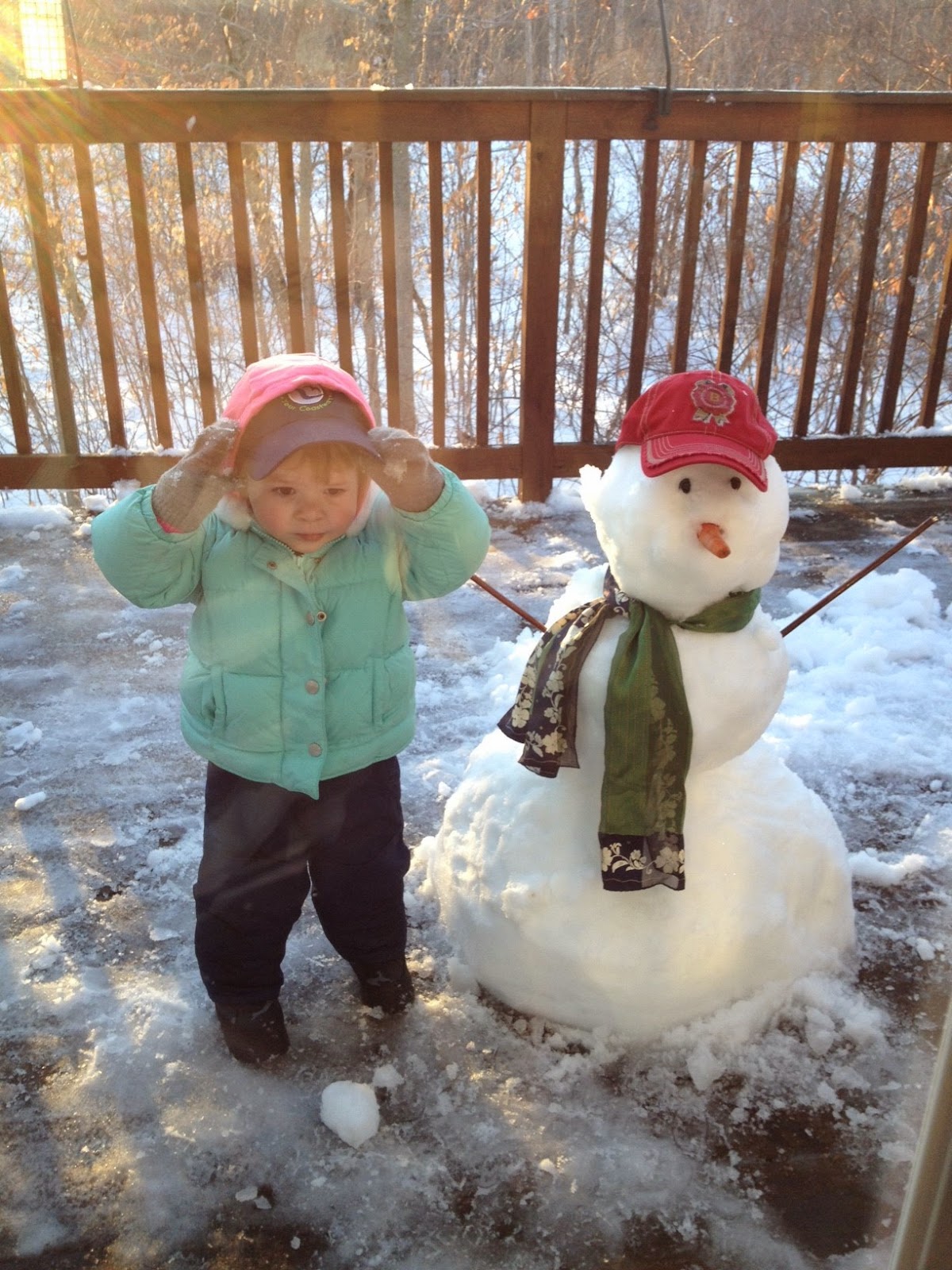 My sister Debbie Corcoran pieced
this Tawny Scrawny Lion quilt for Ellowyne.
The illustrations on the quilt are based on
the Golden Book of the same name.
Ellowyne will receive both the quilt and a copy of the book. 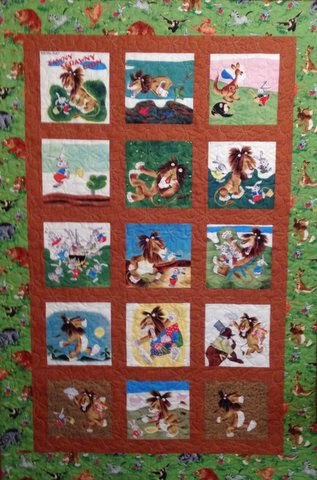 My family loves quilts which makes me very happy.

Posted by Carlene at 1:06 AM No comments:


My plan is to name each my Civil War quilts after a battle
my great-grandfather, Jacob Buck fought in
during the War Between the States. 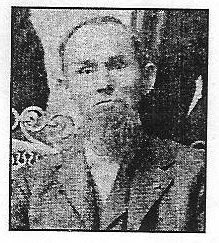 With the help of my sisters,
Deb Corcoran and Judy Steeve,
Gettysburg, the Civil War modified rail fence quilt
shown on my last blog, is completed.

Deb helped me pin it on Leticia,
our Gammill Classic Statler Stitcher.
I used the Goose Down pattern
designed by Dave Dennis.
Judy helped me square it off.
I prepared the binding and sleeve
and attached them to the quilt.
Now Judy is whipping down the binding and sleeve.
I so appreciate their help so
I can get so many quilts completed. 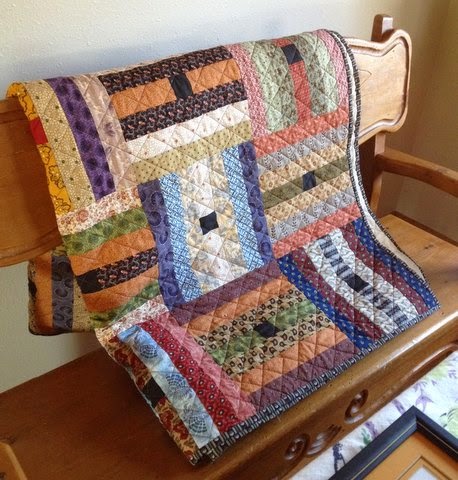 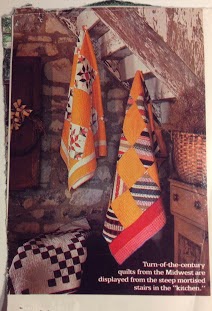 When I saw this photo (above)
in a Country Living magazine years ago,
I knew I would be making it some day,
so I ripped it out and placed it in my
"Interesting quilts" file.
I decided it would be a unique one
using Civil War fabrics
and solid "School Bus orange", red and pink.
This one (below) is still unnamed. 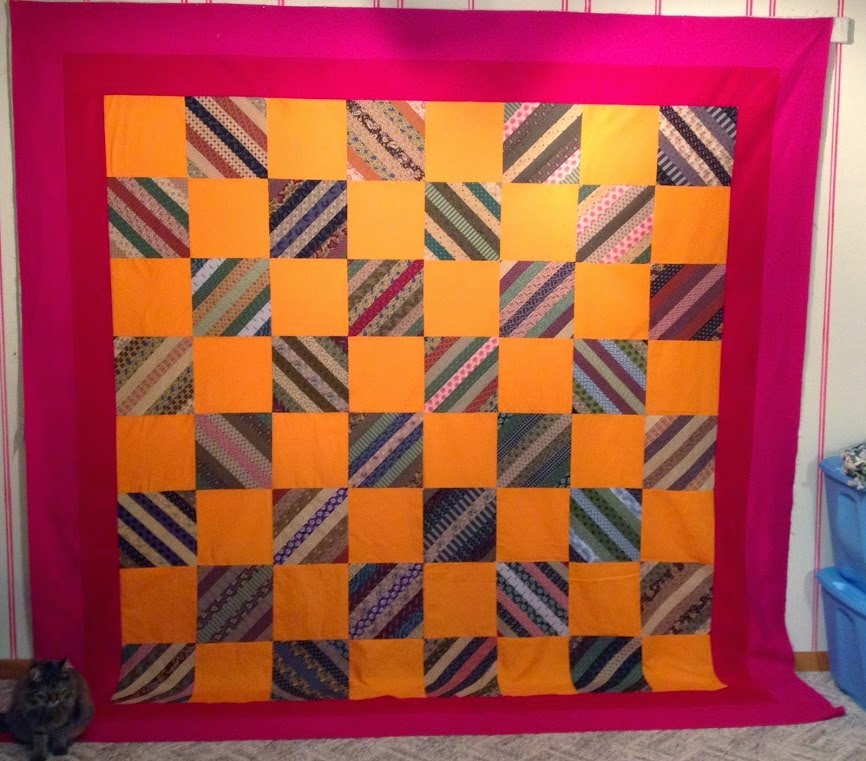 I used Electric Quilt to design it
to my preference--the 100" x 100" size
and determine fabric yardage needed.

My family is not enamored with it,
but I really like it.
I'll have a better photo after it is quilted.
I think I nailed the original, don't you?

Bobbin (below) in her felted wool cat cave.

Well, Bobbin, my mackerel tabby cat
is giving me the "stink eye"
as she is ready for "us"
to go to bed as it is after 11 p.m.
I can't wait to start
another Civil War quilt tomorrow.

Hope you are staying warm
during our cold snap.
Carlene

Several years ago I had an idea to make
six different quilts featuring Civil War reproduction fabrics.
This photo is of the top half of one of these quilts.
I just finished piecing the blocks and
sewing two sets of 25 blocks together tonight. 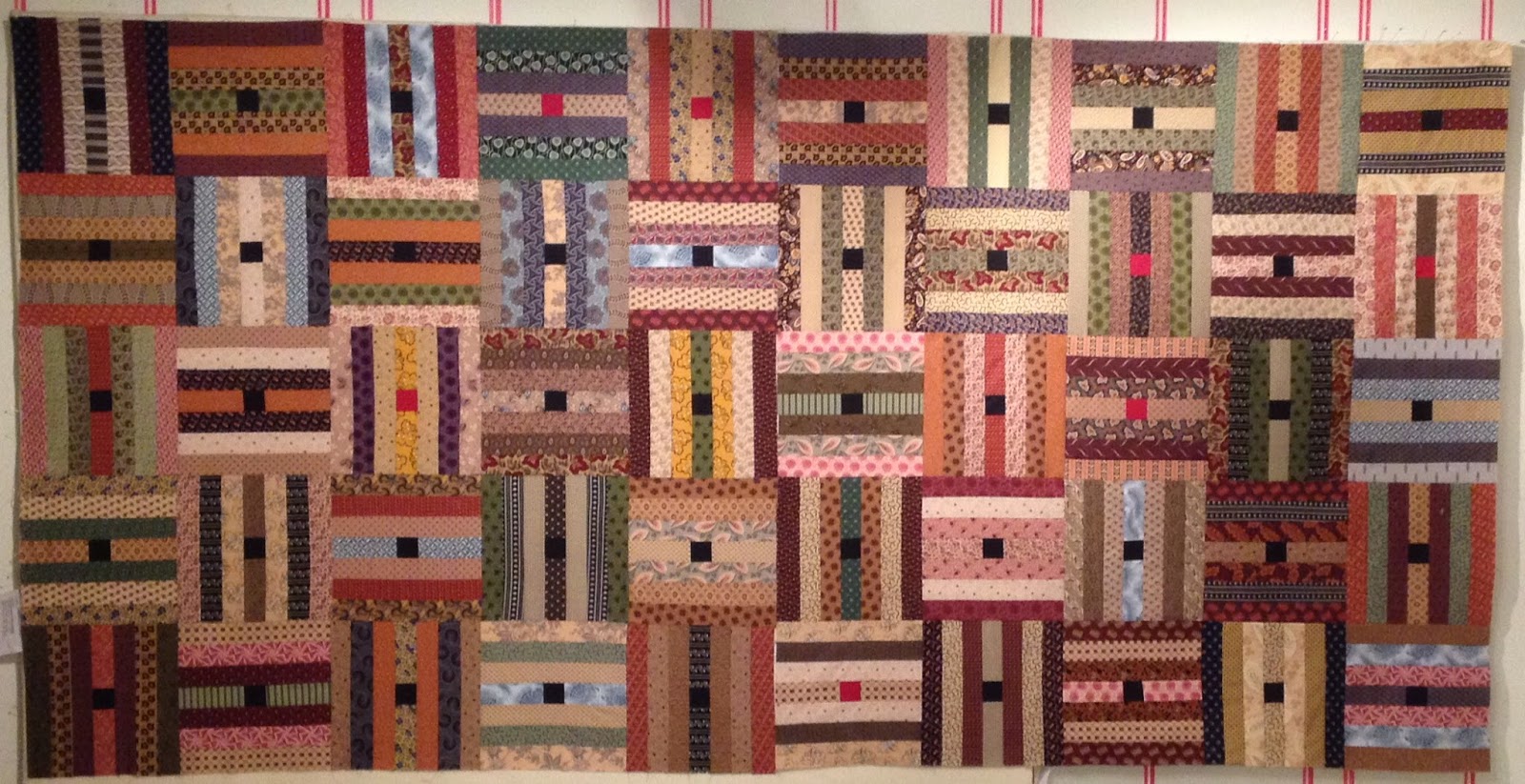 Is it a pattern from the 1860's?  Who knows?
I can't find the pattern in
the Encyclopedia of Pieced Quilt Patterns
compiled by Barbara Brackman.

My friend, Lenor Davis suggested the pattern
could be described as a modified fence rail.
Good idea.

My friend, Kathy Brooks from near Chicago, Illinois
had made a quilt using this pattern years ago.
I just know I liked the pattern and I had to make it.

Here are photos of some of
the other quilt tops and completed quilts
I have pieced in 2014.

I purchased two kits named Hanky Panky
at the Pine Needles Quilt Shop in Cedar Rapids, Iowa
and made this large queen quilt top.
It is one of the 45+ quilt tops awaiting my machine quilting. 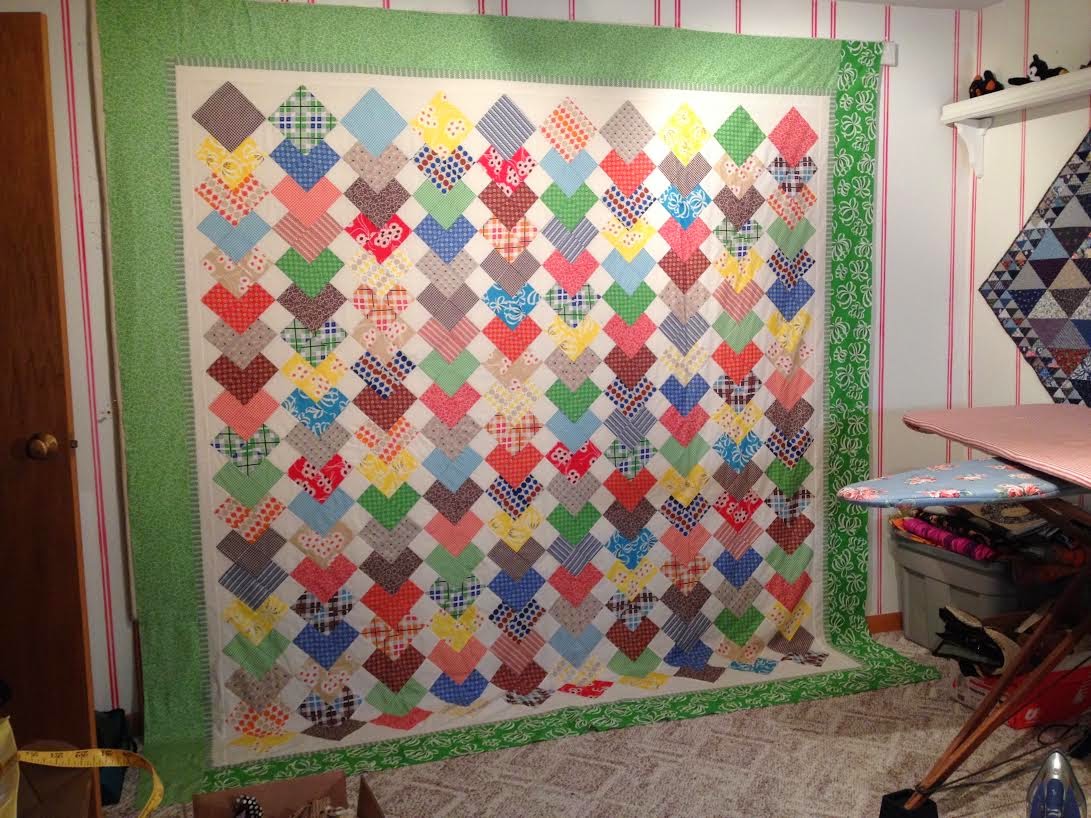 I purchased two layer cakes of the "Collage" fabric line
and pieced this couch quilt which was a Christmas gift
for my niece and her husband, Brittany and Doug Loudenback
who live in Connecticut.

I used the Missouri Star Quilt Company tutorial
named "Cheerio" for my instruction.
I quilted it on my new Statler Stitcher and
was pleased that it arrived at its new home before Christmas. 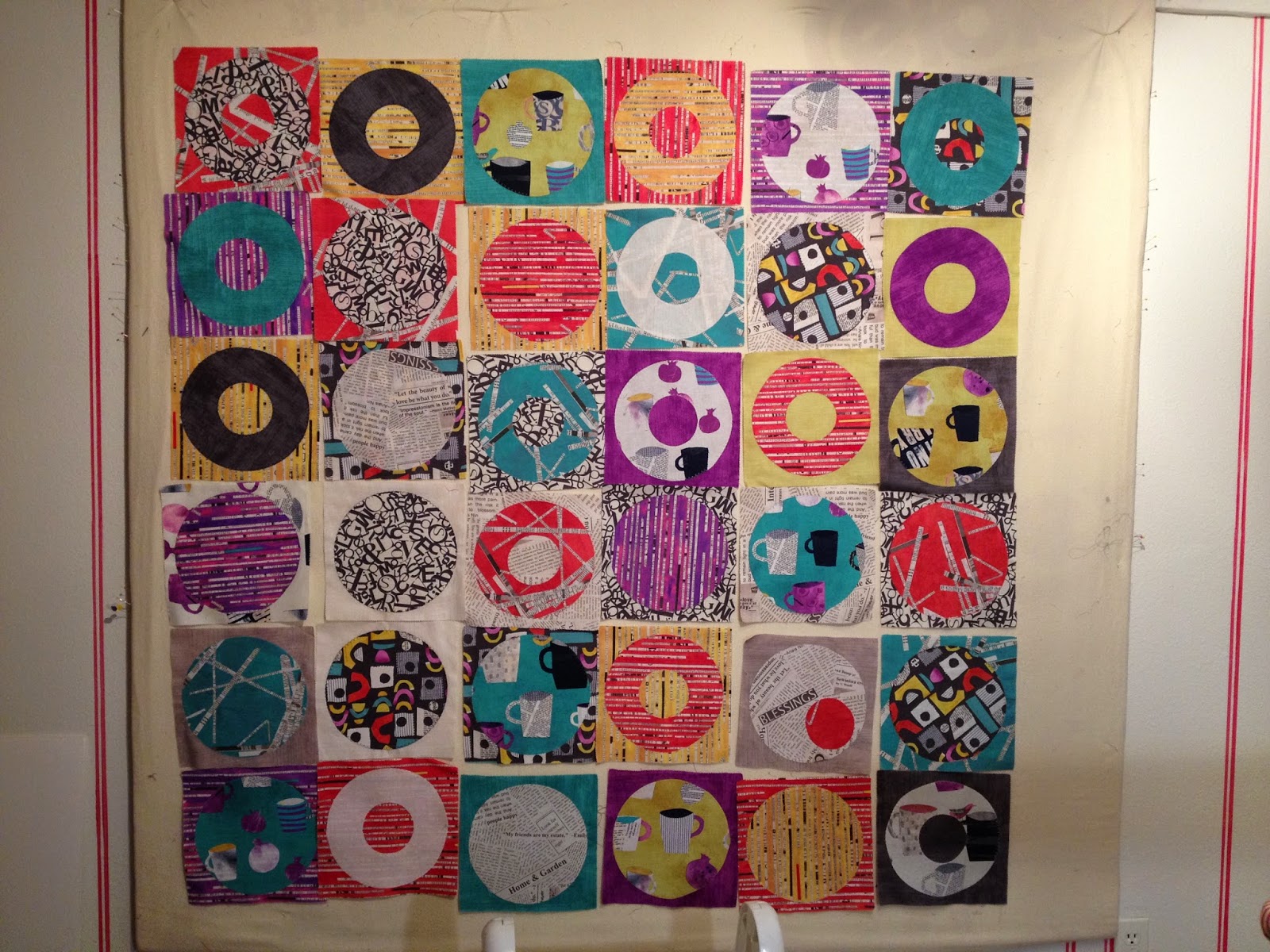 I had a generous selection of fabrics
from the "Wordplay" fabric line
and used them plus some of my other fabrics
to piece two couch throws/wall hangings
based on the "Cheerios" pattern, too.

After Statler Stitcher quilting,
they were gifts this autumn to my sisters
Jo Anne Souza in Connecticut
and Judy Steeve in Clarinda. 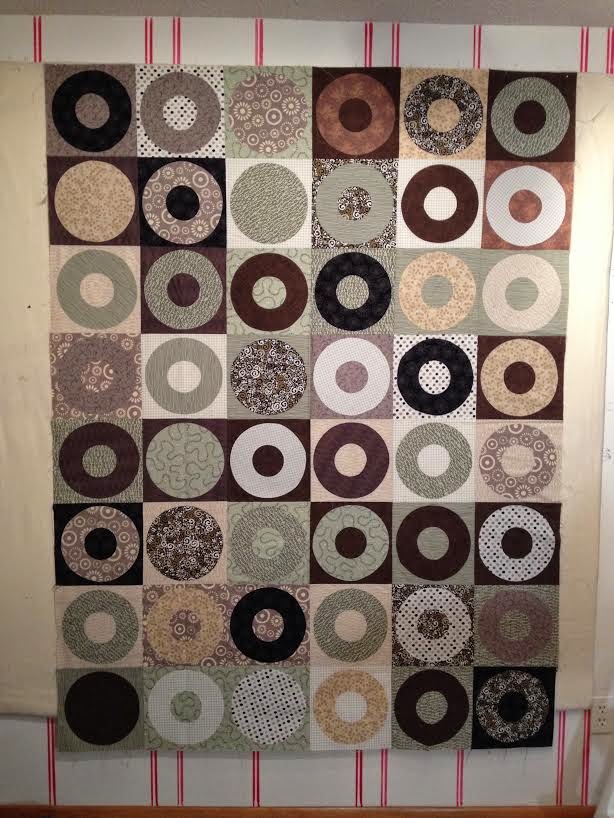 Well, it is time for me to retire tonight.
My goal is to begin REGULAR blogging.
I hope you come back and
find blogs every single week in 2015.

Posted by Carlene at 1:38 AM No comments:

I have started another group of cool ties
for servicemen and servicewomen in Afghanistan and Iraq
for the American Legion Auxiliary.
I should have started sooner....
as summer is already here, but better late than never.
I start with 17 yards of 45" wide
cotton unbleached woven Moda 200
which I dye with Tan Rit dye to a safer sand-colored one.
All 17 yards are ironed and ready for cutting.
Seven cuts 5" wide from selvedge to selvedge yield 7 Hugs. 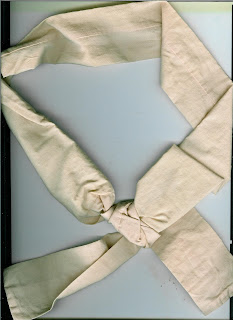 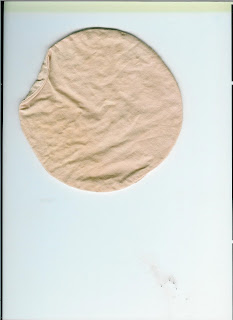 Sew the Hugs along the long side from one end to the other.
Then at one open end roll the seam into the middle
and sew across it using a 1/4" seam allowance.
Using the piece of PVC pipe and dowel,
I turned the 80 Hugs inside out
and then pressed over the 1/4" seam allowance at the open end
and crimped folds 10" from the two ends.
The crimps are where I will sew
after the 1/2" teaspoon of Watersorb has been added. 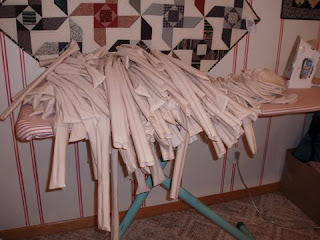 I matched up two circles (Kisses),
sewed them together using a 1/4" seam allowance
but leaving a 1" opening for turning,
turned them inside out and pressed them
while tucking in the 1/4" seam allowances.
After adding 1/4 teaspoon of Watersorb,
I sew across the 1" opening to sew them shut.
They're done.

A Hug,
a Kiss,
instructions for soaking
and a Thank You for Your Service
are slipped into each snack baggie.